The Night is not so young(private)

Morrigan sat on the first pew of the cathedral and gazed upward at the stained glass window. Was the world about to fall apart as they knew it? Were these uprisings from the wolves just the beginning of a war that would be the death of them all? In times past they could gleefully kill each other with abandon without concern for the destruction and chaos that it would cause. These days such a war would attract the attention of the humans; how could it not? Though the mortals were little threat along, their numbers had become alarming. Vampires could not afford to have the light of day shed on their existence.

Especially not while fighting a war. 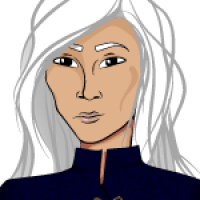 Jin 11 years ago
Jin entered the Cathedral where Morrigan said that she would meet him. He had called her upon his arrival into Nachton as she had requested. Sliding the little round sunglasses up onto his head, he moved further into the gloom of large church. He could see the Elder of the Rose sitting up front, her back to him.

Jin walked forward until he was a few rows behind her seat. There he spoke gently, knowing she was aware of him but not wishing to harshly intrude upon her thoughts. 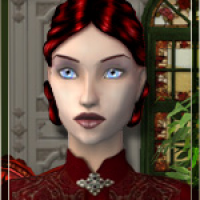 Morrigan Kinsey 11 years ago
Morrigan smiled, her face still turned away. It was good to hear Jing's familiar voice. Standing, she turned and walked towards him.

"We have known each other a very long time, Jing. Can I not be an Elder?"

She favored him with a small rueful smile. He had come as she had requested and Morrigan was grateful. He looked much the same and her mind took her briefly to different times and places. When she was not an Elder but a hard working member of the Rose and he was a gifted Nightsman.

Jin 11 years ago
Jin reached out his hand to her and raised an eyebrow at her request.

"Can a Rose stop being a Rose?"

Laughing quietly, he relented. She had a difficult position and a lonely one. There were very few real friends for those who find themselves at the head of her Order. They were the face and voice of Anantya.

"It suits you, Morrigan. You have always been a graceful flower."

Morrigan Kinsey 11 years ago
Morrigan favored him with an almost shy smile. She took the proffered handshake and replied to his praise.

"And you have always been a master of words."

She would not call it flattery; Jing would not speak such meaningless frivolities amongst his own kind. He was honest within the bounds of politeness unless his duty required him to be otherwise. Morrigan also knew that he would wait until she chose to speak of why she called him here. It was best to simply begin.

"You know that the werewolves are returning to the cities?"

She would have been surprised if he didn't but it was the best way to start.

Jin 11 years ago
Jin favored Morrigan with a light laugh and a tiny bow.

"So I've been told before."

By her, as he recalled... on several occasions.

His expression grew serious at her mention of the weres. Jin had heard the news and had seen some of the evidence in DC. The leaders there were not having as easy a time containing the creatures.

Morrigan Kinsey 11 years ago
Morrigan nodded slightly and indicated the pew that she had just left. Sitting down, she patted the cushioned seat next to her.

"Then you also know that those who had used command on the werewolves and their children are being eliminated. The bind on them is loosening."

She did not say any more and Morrigan knew that she did not have to.

Jin 11 years ago
Jin sat down next to the once warrior queen as she had indicated. He remembered her wild passionate youth from watching it first hand. Anantya had been deeply interested in the goings on of Albion at that time, from both sides of the conflict.

He sometimes wondered how she could work with Sorin at all, given their history together, but Morrigan was a true Elder of the Rose. She looked past personal strife for the sake of the clan. Jin doubted it was easy.

"Yes, a grandchild of one of the elders was killed in DC not too long ago."

Still this was difficult for her. She had to be The Rose while her people were being targeted and killed, ancients and young alike. But it was more than that, Morrigan had command; She had been there on that day so long ago. She was a target just as much as the rest, perhaps more.

"If I may ask it of you. Please be careful, Morrigan."

Perhaps it was wrong of him to request such a thing but he could not let it go unsaid. Likely she would push it aside and tell him that she was being as careful as she possibly could.

Morrigan Kinsey 11 years ago
Morrigan frowned. A grandchild? And so close! It seemed only a matter of time before they came for the ones in Nachton. She smiled gratefully over at Jin when he asked for her to be careful. He remembered. Placing a hand on his shoulder, Morrigan gave it a gentle squeeze.

She doubted that answer was a comfort and it was a shame that she could not give more assurance than that. The best thing they could do was to find the one or ones responsible for the assasinations as soon as possible.

"It stands to reason that I am a target, and Sorin and Amir. All of that makes Nachton a likely location for our murderer. We need an experienced Nightsman here now that Sorin is nowhere to be found."

Morrigan frowned at the last comment but added nothing further. The Elder of the Night certainly knew that his actions were about to be discovered and now he had conveniently disappeared. It seemed to her to be a repeat of his youth; She wondered if they should search the Romanian countryside for the man this time as well.

"That is why I called you."

Jin 11 years ago
Jin was honored that with a crisis of this magnitude she had decided to call upon him. He was also worried. Failure was something that was always a concern to Jin but this time it could mean the lives of clan members...and Morrigan. Especially Morrigan.

There was never a time when he did less than his best but this time Jin was likely not to rest, eat or sleep until he found what he was looking for. Then he could let loose the hounds of the Hunt. Right now everything depended on his Order and without information there would be no safety.

Morrigan Kinsey 11 years ago
Morrigan smiled at him. Of course he would do his best; he was a perfectionist. Having similar tendencies, Morrigan knew that she would likely have to watch him closely to make sure he didn't starve himself in pursuit of the knowledge she had requested of him.

Mothering Jing, who would have ever thought.

"I know that you will. Please be careful as well."

A little of his own advice seemed like a necessary addition. Turning to other things, Morrigan wondered how long he had been in town. Certainly not long, She knew that he would have seen her swiftly upon his arrival.

"Does Mai know you are here?"

Jin 11 years ago
Jin smiled at her and nodded his assent to being as careful as possible. He supposed they would all do their best and hopefully it would be good enough.

At the mention of Mai, Jin smiled. He gave her a small shrug and replied.

That did not mean that she did not know he was here. Jin knew better than to assume such things after all these years. One never knew when the Elder of the Hunt would simply appear and throughout his youth he tried repeatedly to catch her by surprise. In all his years it was not something he had ever physically mastered.

"I will find her later tonight...Or" Jin smiled again. "She will find me."

Morrigan Kinsey 11 years ago
Morrigan was oddly pleased that he had come to see her even before visiting his creator and then she berrated herself for such childish and selfish behavior. She was certainly old enough not to behave like a silly human child with a crush. It was simply that she had not seen Jing in ages and it was comforting to have someone so familiar around in these troubled times.

She laughed lightly at his very accurate statement of the Elder of the Hunt. One rarely went out in search of Mai; they went somewhere she was known to roam and then she found them.

"That is indeed the quickest way to an audience. I am afraid that I am quite familiar with the proceedure myself."

Morrigan stood and on impulse reached over to give Jing a hug. She thought better of such a personal display half way through the gesture and it became awkward and stiff. Wonderful, she really was a human school girl.

"Thank you again for coming, Jing. I should let you get settled."

With a small embarrased grimace that might have looked like a smile, Morrigan tugged nervously at her suit jacket. She gave Jing a final business like nod and then headed out of the Cathedral as fast as she could decently manage without looking too hasty.

Jin 11 years ago
It would appear that Morrigan not only knew Mai well but accepted her quirks. He found himself very grateful for her understanding. His creator could be a challenge to work with and if the Elder of the Rose insisted on things being done a certain way...well Jin wasn't entirely sure what would happen.

He stood when Morrigan stood and was somewhat surprised by the embrace. She had paused briefly before completing the gesture. Jin's first thought was that she was worried that he might find it unwanted. He quickly returned the hug only to find her already pulling away again.

Likely that was not the response she was expecting from him. She smiled for his benefit and then turned to leave. Jin could hear the echo of her high heeled shoes on the stone floor as she quickly retreated back to the Manor.

Staring up at the stained glass window, Jin let out a long sigh before turning to leave himself.