The Sewers / The Enemy of the Enemy / Lykaios 16 years ago

The Enemy of the Enemy

The Wolf pulled off the heavy cover and dropped down into the sewers with ease, letting his eyes adjust to the darkness before stepping away from the ladder and into a mostly hidden alcove, more to stay out of the way than out of any effort to conceal.

It would be easy enough to escape should things go bad, and he had both his sword and his strength should he need them, but for the moment there was little reason to play hiding games. With any luck, they would enter a mutually beneficial arrangement.

He pulled down his hood, though in the darkness it made little difference, and waited. 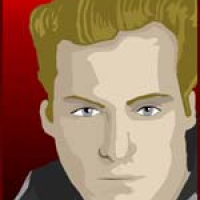 Sorin 16 years ago
Sorin found a nearby parking garage to park the Aston Martin and then walked the short distance to the sewer opening. Honestly, crawling about like a rat! Sorin raised his eyes heaven-ward and thought to himself, the things he had to do to get somewhere in this world. Amazing, just once it would be nice to have it handed to him with ease. Hmm, too much to ask for that these little things go smoothly? That the psychotic killer he was about to met didn't decide he was a better hit than the blonde or that he had the ability to do them both?

Sorin held no delusions that the Wolf would want to hunt him down one day. Smiling he remembered that sweet scented, watery eyed vixen he'd spoken with previously. Oh yes, there was a plan in mind for the Wolf and he'd lay his money on that beautiful fox who was far more sly and infinitely more deadly than the killer he was about to converse with.

With a snort, he reminded himself that he should be nice to Lykaios, after all these were going to be the man's last few days on earth.

Opening the grate with gloved hands, Sorin carefully stepped down inside and pulled the cover back in place. Once he was at the bottom, he slid off his gloves and tucked them away.

His senses picked up the lurking shadow with reasonable ease, the Wolf was better at hiding than most but it would seem he wasn't playing that particular game tonight. Just as well, Sorin was not in the mood to play "who was more talented" with the man.

Getting straight to the point, he said

Lykaios 16 years ago
The Wolf nodded in acknowledgement of The Supplanter's voice, chuckling his low dark laugh. No dancing tonight then. So much the better; his time was short.

"This is true."Â? His laughter subsided with the abruptness of turning off a switch, and he regarded his old accomplice steadily for a moment before continuing. "The Heir gives A Supplanter trouble?"Â? He shook his head in a mockery of sympathy. "So much trouble from The Bitch, and now so much trouble from her favorite. A Wolf is glad to set things right."Â?

He took a step forward, dropping his voice even lower than before. He remembered their last altercation well enough to have little interest in a repeat performance, but wanted to get his point across just the same. "A Wolf will kill The Bitch's spawn if The Supplanter wishes it. This time, though, a Wolf will kill -his- way."Â?

Sorin 16 years ago
Sorin kept himself from expressing any outward sign of annoyance at the need to state the obvious.

-No, Thaddeus is a lovely child, most helpful, I love him so much I want to keep him with me always....stuffed and mounted on my wall.-

Sorin stood his ground as Lykaios stepped forward and stared coldly into the man's eyes. Calmly he replied.

Lykaios 16 years ago
The Wolf nodded sharply in agreement. "Very well, Supplanter."Â? His mouth curved into the most genuine smile he could muster, though it likely still looked a bit frozen and odd. "A Wolf will make his kill as soon as he finds the prey."Â?

Normally The Wolf would enjoy taking his time, researching, studying, understanding his prey and just how to make him suffer in the worst of ways. In this case, though, he had waited long enough and was reasonably confident The Heir would suffer terribly before The Wolf allowed him to die in any case. Besides, The Supplanter seemed to get quite miffed when The Wolf took his time. Impatient immortals...one would think that eternity would give a vampire more perspective on time but it was not to be with most of his kind.

Sorin 16 years ago
Sorin expected that kind of response but he also knew some of killer's skills. He pulled on his gloves and then reached into his jacket pocket and pulled out the smaller set.

"I believe you will find these useful for that endeavor."

Sorin held them out in front of him. The man's enjoyment of playing around with his targets was going to be his downfall one day.. or it probably would have if he was likely to -live- to have another beyond this one. Ah well, at least Ellis wasn't likely to play with him for as long as the man played with his own victims.. that should be some comfort. She tended to move on rather quickly from what Sorin noticed,such an appetite on that woman. It was strangely exciting.

Lykaios 16 years ago
The Wolf smirked and reached for the gloves, taking them carefully from The Supplanter's hand and shrugging off one shoulder of his cloak to get to his backpack. Only when the gloves were put away did he speak again, though he was in fact quite pleased with this development.

His smirk faded a little as he considered the kill ahead. It was all going to be over soon and that was a shame in some ways; there was just something anticlimactic about waiting and watching all these years only to have it be so easy now. There was a sense of relief as well, to finally be done with those who had ruined his life, but in truth he would have liked more time to get everything just perfect. One had to take the opportunities as they came, however, and The Wolf was no different.

"All the sooner then."Â? He chuckled low. "A Supplanter is useful indeed."Â?

The Wolf knew how to bear a grudge, and he had forgotten none of his ill will toward the Anantya Elder, but it was not as though he never worked for people who would betray him for the sake of their own skin at any time. In fact, that could be said for nearly all of his clients. He was somewhat surprised to find that there was now a shred of gratitude mixed in with the grudge he bore; while hatred for The Supplanter had stewed for many years, The Wolf had not forgotten that it was this vampire who had handed over not one, but two of his enemies. There was, however, historically a heavy price for such kills, and The Wolf suddenly wondered what the catch was.

"A Supplanter will know when the deed is done."Â?

A closing remark of sorts, though The Wolf made no effort to move, expecting that The Supplanter would have some final word to add in his silky voice. Not this time, though. The Wolf would agree to anything to get to The Heir, but that did not mean he would keep his word.

Sorin 16 years ago
Sorin waited a moment contemplating the man in front of him before making a simple answer.

There was no point in asking more, this was a kill that Lykaios wanted to do for personal reasons and if the man couldn't be trusted to finish that task properly and timely on his own then nothing Sorin could say would change that.

He knew very well that the man planned on torturing and playing with his victim before he was finished, that very thing was what caused their disagreement last time, not that he cared for Emma, he simply wanted it done quickly, however hiring another killer would be another person who knew and right now economy of information was more important than a few extra days.

Sorin actually had a pang of conscience at the thought of the horrible way Thaddeus was likely to die. He paused turning towards the ladder and forcefully shrugged it away. The boy involved himself with Evenhet against his clan and Sorin's wishes. A small voice that seemed to enjoy tormenting him pointed out that it wasn't just any Evenhet and that Sorin might have overlooked anyone other than the one Thaddeus chose. He might have only had his Evenhet bed buddy killed and let Thaddeus come to his clan for comfort but he chose Alfarinn and that was unforgivable. The practical side agreed with this logic saying that he didn't know how much of the truth they knew.

"If you wish to cause him the greatest amount of pain before he dies...kill the blonde man that travels with him."

Sorin spoke quietly before climbing up the ladder. He still refused to call Alfarinn Thaddeus's lover though his mind punished him with the remembered image of them both together in the foyer repeatedly. He trusted Lykaios would enjoy this information and use it to its fullest advantage. Sorin's work here was done.

Lykaios 16 years ago
The Wolf grunted softly in surprise at The Supplanter's terse reply, still somewhat suspicious of deception. Could it really be so easy? The Wolf could hardly consider himself so fortunate, but it seemed The Supplanter was quite willingly handing over The Heir with no strings attached.

And now the Anantya was giving him even more assistance! A cynical part of The Wolf wondered if killing the extra one was, indeed, the drawback to all of this, though if that was the only catch there would be absolutely no complaints from his corner.

Even so, he would have to be more cautious; The Heir was no match for him, but taking on two of anything at once was different sort of proposition and he had no idea of what this second party's strength might be.

It mattered little in the scheme of things; both would die screaming, and The Heir would suffer grievously before his end. It could be no other way.

But first, the ring.

He watched The Supplanter leave, then headed down deeper into the sewers, toward The House of Pain.