"Blasphemy!â€ Tavi glared at him before laughing at the idea of her ever wearing something like a pant suit. The only exception to that rule would be playing a part for a job, either for the pack or for her line of work. "Sensible shoes on the other hand...â€ She liked to run and the idea of not being able to run because she was wearing some god awful pair of heels was unthinkable. "are something I take into consideration...but!â€ She held up a finger pointed toward the sky. "They must be cute sensible shoes.â€

His answer to her question was amusing. She arched an eyebrow at him when he moved around to the passenger side door and stood there waiting for her to open it.

She gave him and even look before smiling obligingly. "As you wish, Sir.â€ Her British accent was flawless when she wanted it to be, having spent plenty of time undercover as a little delinquent in London had made it necessary.

Giving Guillaume a short bow, Tavi came around to his side of the car and opened the door for him, with perfect politeness. She waited until he turned to make his way into the seat before swatting him soundly on the behind.

Closing his door, Tavi returned to her own with a satisfied grin. She got into the seat and said. "A'right, short term parkin it is.â€ Pressing the start button, Tavi got them on their way. She would even take the most direct route there. Wasn't that nice of her? "I'd buckle ma seatbelt, if I were you.â€

Guillaume 9 years ago
"It would be worth the risk."

He replied with ease and confidence. It would be too, that he was certain of. They had felt each other out well enough, flirted casually enough, that it was now just a matter of making a move. He would do so shortly. Perhaps not over this meal but he would so shortly.

Suppressing a smile at her images Navid shook his head. She, perhaps, had more creativity and imagination that he did. One might have assumed that just by her fashion sense though.

"You intend to saddle him? Do you need chaps and a cowboy hat for this event?"

He asked with a raised eyebrow. If that were the case he might be slightly jealous of Evan. Some people would have all the luck.

"The small garage by the executive terminal, on the roof."

Nachon had a wonderful airport, really rather impressive. It was also big enough that smaller private planes and charter flights had their own terminal. There simply wasn't room at the gates where the commercial flights went in and out of. It also was easier for those people who could afford such things, they didn't have to mingle with the little people. Although, they did still have to take their shoes off when they went through security, no one was that special.

"You may have all my raw food if you like. As long as you don't expect me to eat it I don't mind at all."

Kiyoshi preferred his meals under done to say the lease, so did ThÃ©rÃ¨se, so did any number of his family. It made no difference to Guillaume one way or another so long as their was a cooked option available he would often bow to their preferences when dining out. It was harder to satisfy their pallet in public. It was an entirely different matter during the full moon. It tended to even out.

They zipped through airport traffic, which was worse in some ways that regular traffic. Far too often people weren't paying attention and had no idea how to get where they were going in the airport besides. It was a combination that caused him another tense moment or two.

When they'd made it safely to the garage he gently took her had and kissed it. 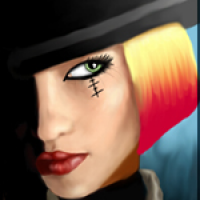 Octavia Emiliano 9 years ago
She liked that he thought that frisking her would be worth the risk. Tavi tried to be more coy but a smile still did its best to form, which it did in small twitches as she tried to get it under control, without success.

Turning to look at Guillaume, she blinked at him in wide eyed mock innocence when he asked if she needed chaps and a cowboy hat in order to jump on Evan. "Do you think it would help?â€ Then she tsked at him and shook her head. "Remember I am only doing this in your defense so no mocking my methods, mister.â€ Woo, chastising in alliteration, that could be a mental sport of some kind.

It was fairly easy, with direction from the pilot in the passenger's seat, to find the parking lot that Guillaume had mentioned. Tavi parked near his car when he pointed it out.

"Well then why on earth would you order it?â€ She laughed softly, when Guillaume gallantly offered her all of his raw food. "However, should you be given raw food that you did not order, or even raw food that you do order...â€ She arched an eyebrow at him. "I will gladly spare you the burden of consuming it, or worse, cooking it.â€

Before they decided which car to leave in, Guillaume turned and took her hand. He gave it a gentle kiss and asked if he had thanked her. "I am pretty sure that you did. However, don't let that stop you from doing it again.â€

In fact she wondered if she could plant banned objects on Guillaume's person in the future, maybe several times, so that she could bail him out again.

Amusing as that was, she wasn't that desperate for a date, even from a hot Frenchman, Tavi would see how lunch went and whether he was interested enough to ask her out somewhere that did not involve crime in some way.

((OOC: Out for Sushi and non- raw food and plotting of pranks. Muaaahaahaaaa! ))

Guillaume 9 years ago
"The chaps might help some things..."

And he did have some very appealing thoughts along those lines. But he would save them for a more appropriate time.

He didn't say anything about the raw food. Navid did owe her dinner, twice over, he might opt to start paying that debt now. Although, he had to admit it was much nicer to be in debt to Tavi than a bank or something equally mundane.

Arrangements were made for the cars and directions given for the sushi before they headed out to find something raw to nosh on. Undoubtedly the planning of this onslaught of post it notes couldn't take long, even if they planned for every contingency. That would give him plenty of time to ask her out more formally. After all he'd be hard pressed to find a better time.