Alfarinn held Thaddeus on the pretense of supporting his somewhat inebriated friend. Still he could feel nothing but his own enjoyment and comfort with the arrangement. He should be able to feel Thaddeus easily now. Touch always heightened his abilities. Nothing, his own emotions seemed to drown out everything else. It frightened him to be so caught up in himself not to be able to even sense another person.

Was he really that selfish? Alfarinn would not have thought so. His empathy made him painfully aware of people's feelings most of the time, whether he wanted to know or not. Here, the one time in a long time, he desperately wanted to know what someone else felt and he could not get passed his own desires.

He gave it up for a lost cause, perhaps later when he was more calm. If his emotions were going to get the better of him then he'd do just as well not to fight them if it weren't necessary.

Alfarinn didn't even glance in the bouncer's direction when they walked passed.

"Since you were taking an interest, it looks like I managed to keep track of him just fine."

Bouncer 16 years ago
Willowy boy has a lot of lip, doesn't he. A lot of lip. 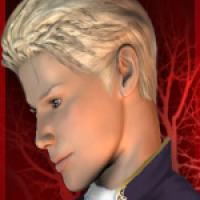 Thaddeus Grey 16 years ago
Pleasantly dizzy and slightly giddy from the excitement of the hurried escape, Thaddeus continued to grip Arin's arm long after they exited the club and made their way hurriedly into the sewers. As they moved out of the dimly lit tunnels that marked the entrance to the House of Pain and into the darker tunnel leading to the portal home, Thaddeus found it was an increasing struggle to keep his footing. Still, there was the danger they were being pursued, and so he stumbled on in the darkness, occasionally bumping awkwardly into the taller man's side.

He rather hoped the Evenhet didn't mind.

Finally, he held up a hand to indicate they should stop.

I'm...goodness, drink hit me a bit harder than I had believed. Just...a moment, please.

With that he leaned his forehead on Arin's cool upper arm, which had the effect of making him feel slightly less flushed and dizzy. He turned his head and rested his cheek where his forehead had been, the dizziness suddenly replaced by lazy sleepiness. Softly, he murmured:

's better. We should go. 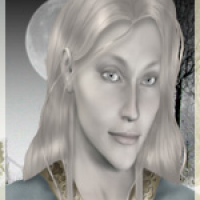 Alfarinn 16 years ago
Alfarinn did his best to focus on getting them through the sewers as quickly as possible for more than one reason. Whatever Anantya owned the dog might get curious and think to check this way. Mostly though it was knowing that they made Thaddeus uncomfortable. While he seemed to be having a difficult time sensing the Anantya at the present, he knew this much from the past.

However the occasional brushes were not helping his concentration in the least.

When Thaddeus stopped, Alfarinn looked down at him in concern. Oh...everything was ok.

Except that the incredible urge to wrap his arms around the man was becoming almost too much to handle. Feeling Thaddeus leaning against him, Alfarinn could almost let himself believe that Thaddeus wanted him to pull him closer. That this contact was something more than the Anantya being less conscience of his actions than normal. Though the painful reality of it was that had Thaddeus been sober he'd have never touched him at all.

He sighed sadly and pulled Thaddeus closer, wrapping an arm around his waist to help guide him through the darkness.

"Yes, We should get you home."

Thaddeus Grey 16 years ago
Thaddeus leaned gratefully into Arin as they resumed, at a slower pace now, walking through the sewers. Even the thick sleepiness was fading from him now, leaving him simply relaxed and calm.

It seemed, though, that his conscience was rushing in to replace the fading intoxication, all too ready to tell him to release that Evenhet at once and stop being foolish.

He rather wished it would go away for just a little longer. He knew it was childish, that he was only delaying inevitability, but there was something else to it as well. Something fierce and raw and present that Thaddeus did not fully understand, deeper than want, and ready to tear the throat out of his relentless conscience.

They reached the ladder before he could think much more.

I should be able to make it. Feeling a bit better now.

Reluctantly, he untangled himself from Arin, struggled for a moment to put the gloves, which he had tucked in his shirt, back on, and began climbing up.

Alfarinn 16 years ago
Alfarinn nodded and kept the disappointed protest to himself when Thaddeus released him. He reached into his pocket and pulled out the leather thong to tie back his hair as he watched the Anantya pull on his gloves and begin to climb the ladder.

There was only a short walk to the apartment and there he'd see that the Anantya was safely home and then he'd leave and go back to his own suite in a modern tower of glass with all the modern conveniences a man could wish for. Except that it wasn't a modern convenience that he wished for...ached for.

He pulled himself up the ladder behind the Anantya following him closely lest Thaddeus should slip. The blonde might -need- him even if he didn't want him. It was something.