She kicked open the door, so hard it came off its hinges, and stormed inside her childhood home, breathing like a predator. For a moment she thought there was no one home after all, that she had been mistaken in coming here, but then she heard the noises coming from the kitchen. She pushed open the swinging door, and there they were, huddled together like a pack of mice - her mother, her father, her brothers. All of her brothers.

She didn't know when the gun had fallen into her hand - she couldn't remember pulling it out - but now she aimed and fired two shots in quick succession. Two for her father. Then one each for her brothers. No hesitation as she put a bullet into each of their heads.

Then she turned to her mother, who was hiding her face in a dishtowel, covered in blood, moaning. No, no, no.

She sat up, swearing, trying to untangle herself from the sheets and wipe off the film of sweat all at once and succeeding in neither. She ended up on the floor in a graceless heap, while Ernie snored on in the next bed over.

To say that their journey had been long and trying didn't cover it - to Nova, it had been epic. It was Frodo's trip to Mount Doom, only where she was going simply -had- to be worse. She was weary before they'd even began the work they'd come here to do, and now to top it all she was sleeping poorly. She'd never in her life slept poorly and was not accustomed to the side effects - the crankiness, the short(er) temper, the slow wits. And she certainly had never had nightmares - she gave those to other people.

Finally extraditing herself from the sheets, she shoved herself off the floor and headed for the shower, mostly out of a lack of anything else to do. She couldn't go out, as it was still daylight, and there wasn't much she could do in the room lest she wake up her sleeping companion. Instead, she washed her hair and went over the past week in her mind, a litany of wrongs she would use as ammo in her confrontation with her family. Of course she knew, deep down, that the flat tire, the lost directions, the stolen postcard, all the little disasters that made this trip what it was, none of those things were her family's fault. But one thing kept running through her head.

Her own voice, amplified by the shower stall, startled her, and she gave a nervous chuckle. But yeah, that was right - she'd come all this way. Across the whole damn country, and her family wasn't about to screw her over now, not after everything she'd been through.

And with that thought, she turned off the shower, dried, dressed. Their first stop would be her baby brother, in prison, if for no other reason than because she wanted another ally. Which Yoki was - whatever Ernie might say, he wasn't in on this plot to frame her for a false murder and extort her money and her secrets.

As it turned out, their adventures were just getting started. 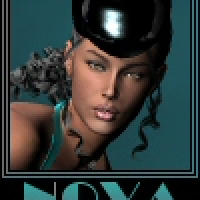 Nova 12 years ago
Nova went into a very scientific rage after leaving the prison. She went calmly into the kitchenette, opened each cabinet, and broke every single dish, one by one, until the floor was covered in ceramic dust. She had not spoken since leaving the visitor’s room, when she managed to bite out three painful little words.

Ernie hid under his bed until the storm passed. When he crawled out, Nova was staring at a wall, breathing slowly and evenly. She could have been asleep if not for her wide, unblinking eyes.

There was a gun held loosely in her hands. Ernie found this unsettling and tried to be careful as he approached, but found that he had no idea of what he could say to this woman to convince her that putting the gun down would be a good idea. Fortunately, Nova chose that moment to start talking again.

“So. He was in on it.” A soft laugh. “I guess I thought…” Her face hardened, and she twisted the gun around in her hands until the barrel was pointing at the ceiling. “Well. I was soft. Won’t be making that mistake again.” There was a long silence, then, as Ernie contemplated taking the gun away by force, and Nova contemplated blowing the wall to pieces. Then, suddenly, the words shot out, sharp and hard and angry. “I don’t have anything. They just want to hurt me. I have my job and I don’t have anything that they would want and this doesn’t make –sense-. And why wouldn’t Yoki be in on it? I was never there. I thought it would be better for him, if I wasn’t in his life. I thought everything was okay when I wasn’t there to be the scapegoat, when they had to fix things instead of hating me, I thought it was better that way. Yoki didn’t need to see…the things that went on when I was home.”

Her voice trailed off, sounding small and weak when she had started so righteous and strong. She took a steadying breath and began again.

“I’m really sorry. I…um. I think it would be better if I put you on a plane now. You don’t need to be here.”

At her helplessness, a sudden and inevitable instinct took over. Ernie frowned, then reached out, sliding one hand over Nova’s knee and gently taking the gun away from her. She gave it up with an ease that surprised him, and he set it carefully on the bedside table.

Nova sniffed. “I don’t know. Smooth over the criminal charges, give them some money, walk away and never see them again. I just don’t know.”

Ernie rested his elbows on his knees, angling his head so that he was looking up at Nova. “How about I wait until you figure it out?”

Another sniff. “Why? So you can keep me from doing anything stupid?”